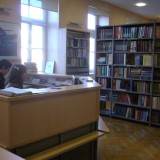 Ground floor of the Faculty of Economics in Osijek, Trg Ljudevita Gaja 7

Dear users, also this year we decided to mark the Day of the In Love. We invite you to take a look at our little exhibition and to fall in love with some of our new titles that we will gladly recommend to you.

The School of Economics has compiled an exhibition titled Good Book with Good Wine & Wine Economy. With the exhibition we want to connect the book, wine and contribution of the economy to the wine industry.

We invite you to visit the exhibition and the Library’s web site where we have prepared information sources on economics and wine.

The Croatian Bookstore Society in the eve of the Days of Croatian Libraries in 2017 opened the Competition for the best promotional movie about libraries, library services or any type of library promotion. The School of Economics in Osijek decided to express its creativity and desire to get closer to its users, and with its nice text and video it participated in the competition!

The happy EFOS library team has gathered many sympathies with its EFOS Library Swag.

Thank you all for your support. We are here for you! #danhrvatskihknjiznica2017

The new exhibition “Change Begins with Us” – Human Rights Day 2017.

The Day of Human Rights is celebrated every year on December 10th. This is the day when the General Assembly of the United Nations passed the Universal Declaration of Human Rights in 1948. For the first time in the history of mankind, the right of all people to “life, freedom and security without any distinction” was recognized.

This year, the Human Rights Day celebrates the seventies anniversary of the adoption of a document that outlines the inalienable individual rights – regardless of race, gender, religion, language, political, national, material or other grounds. Since then it has been translated into more than 500 languages.

The Universal Declaration of Human Rights enriches and empowers every individual. The principles discussed in 1948 and formally formulated are still relevant today. The emphasis is on the desire and initiative of the individual in representing their own and other rights.

It is important to take the initiative in everyday life and support the rights that protect us and thus promote the link of all human beings.

With this idea, the EFOS Library has decided to host this year’s Human Rights Day with a new exhibition that will consider and learn about equality and freedom.

The change begins with us: http://www.standup4humanrights.org/en/take-action.html

Month of Croatian Book 2017: All in One Place

The Croatian Book Month 2017 was officially opened in Crikvenica on October 13, 2017. The sponsor of the event is the Ministry of Culture of the Republic of Croatia, and organizer of the Zagreb City Library.

This year’s theme is Encyclopaedicism as a place where all knowledge is gathered: https://issuu.com/knjinicegradazagreba/docs/mhk_programska_knji__ica_2017issuu./

We have prepared a list of domestic and foreign online encyclopaedias. Find out why to use the encyclopedia rather than another source!

This year’s theme of the International Literacy Day is “Literacy in the Digital World”. The aim is to reflect on the types of literacy needed in a digitally mediated society and to explore effective policies and literacy programs in accordance with the possibilities of the digital world. The background to this year’s theme is the UNESCO Declaration on Inclusive and Equal Education and Lifelong Learning, Education 2030: Incheon Declaration and Framework for Action.

Digital technologies at an unprecedented rate of ground change the way we live, work, socialize, and learn. They provide new opportunities to improve all aspects of human life including access to information, knowledge management, networking, social services, industrial production, and mode of work.

However, those who do not have access to digital technologies and the required knowledge, skills and abilities may end up on the margins of digital society. Literacy is certainly one of those skills.

The fact remains that in today’s world, despite progress, at least 750 million adults and 264 million juveniles still lack basic literacy skills. It is up to us to take advantage of the environment we are in! We have extracted books that can help us move around in today’s world. The exhibition covered topics such as lifelong learning, digital economy, speech, presentation skills, public speaking, e-learning, media culture, verbal and non-verbal communication and business communication.

The exhibition “What’s new?” In the Library

One of the main goals of the library is to provide access to a variety of information to help you in your professional and private activities and community advancement. Exploring the literature undoubtedly widens the horizons and forms the opinions and attitudes of the community.

As a higher education library, we rely mostly on the materials represented in the study plan and program. However, there is a lot of things. From children’s paintings and fine arts to psychology, sociology and philosophy.

Where can we find information and how to deal with them? Why do we do this? Library work is based on good organization of information – library and non-library materials. For the past few years we have been working on the online catalog of the units we own so you know what you can borrow and use. From printed materials, magazines and books, to electronic sources. We work on a repository of bachelor, master, scientific, and similar papers that you can access at any time. We are preparing and collecting literature for professional subject topics from a huge amount of resources. We archive and organize it … After all, we are confident we are doing all this for the benefit of the community, scientist, student … user.

The Library of the Faculty of Economics in Osijek participated in the Creative Rewards in 2017 with the theme “Children’s Literature as Second Call”. As part of this event, a round table was held and an exhibition on the subject was opened. The works of Dubravka Pađen Farkas, Director of the City and University Library Osijek, and professors Antoaneta Klobučar, Ivana Barković Bojanić and Jasna Horvat were presented. It is about the alchemy of the literary word of a children’s book author who is not a primary occupation. They are statisticians, mathematicians, professors, librarians, and writers alike. Likewise, it is considered whether words as the ultimate art of children’s books have been created for the eternally sought after elixir. The exhibition has gathered and exhibited the entire opus of children’s books of the mentioned authors.

As part of the International Women’s Day 2017, we present you an exhibition titled “Think of Equality”. With this exhibition we are trying to stimulate gender equality dialogue through the Library of the Faculty of Economics in Osijek. Various material about women in economics, issues of inequality and struggle for women’s rights were presented.

The idea of ​​marking the International Women’s Day appeared at the beginning of the 20th century in the industrialization period, which often led to protests because of poor working conditions. That holiday should not lose its ideological base today and become a consumerist feast, but rather to celebrate the economic, political and social equality of women. The Library as an institution whose role to spread democratic ideas with the exhibition encourages its users to think about gender equality and provides relevant sources about the subject.

An exhibition “Domestic and international magazine trade” was set in our Library. In order to accomplish the tasks of information support for scientific research, library traditionally cherishes and seeks to foster long-standing practice of cooperation with economic and related faculties and other institutions in the country and abroad, which includes the exchange of scientific journals.

Exhibition “In memory of Alfred Nobel”

The second exhibition presented during the Croatian book month 2015 was “In memory of Alfred Nobel” which aimed to familiarize users with the Nobel Prize winners in economics, their theories and best-known works. Nobel Prize in Economics was established by the Bank of Sweden on its three hundredth anniversary in 1969, and the full name of the prize is Award of Bank of Sweden in Economic Sciences in Memory of Alfred Nobel.

As a part of the Croatian book month 2015, we present the exhibition “Evolution of library activities through the years” which shows changes that have affected libraries. The exhibition presents a graphic description of a successful adaptation of the traditional library values ​​into a modern environment. Through the exhibition we follow development of the library profession during the years of transition and we can see a leap from the classical model which is complemented by new IT skills. You can learn basic tasks of libraries, curation, their mission and role of the library today. Librarians are presented as intermediaries in seeking and supplying the relevant sources of information and as well as experts and users of social media, digital repositories, databases and online catalogs, which confirmed the role of the libraries in the process of lifelong learning.

Book Face is a creative and fun way of promoting books and reading. The cover of a book or magazine becomes a challenge for participants to demonstrate their creative skills in order to create an imaginary situation and environment, and at least for a moment become someone else. The initiative has already become a global trend among libraries and many interesting examples can be found all over the Internet (on Facebook, Instagram, Tumblr, Pinterest and profiles on social networks and websites of libraries around the world. To find inspiration, simply use the hashtag #bookface or browse the shelves of the nearest library or bookstore.

The exhibition named “Humans of EFOS Library” was inspired by the original artistic-social idea of photographer Brandon Stanton – Humans of New York (for more information, please visit the HONY website at http://www.humansofnewyork.com/ and the Humans of New York Facebook page at https://www.facebook.com/humansofnewyork). By presenting photos of students, teachers, faculty staff, demonstrators, librarians and other library users and visitors and their short stories in the library environment, we wanted to acquaint you with the familiar faces that you meet in and out of the Library space and thereby introduce you to a different perspective of the Library.

Blind date with a book

The initiative is modeled on the US version of “Blind Date with a Book”, which was aimed to attract as many users to our Library, introduce them to the readers’ world, and encourage them to read by carrying out a kind of guerrilla marketing campaign for the library. Books wrapped in the symbolic red paper were appropriate for “Valentine’s Day”, while books wrapped in plain brown paper were representative of “Anti Valentine’s Day”. This initiative was successful in promoting the connection between the library and its users. Many library users visited our Library that day, supported the initiative, got acquainted with the staff, and chose for themselves or their loved ones the book that caught their attention.

We hope it will be to your liking.
We thank everyone for their cooperation; especially those who claimed that they do not like to be photographed and are not photogenic.